Like everybody else, I read the Steve Jobs biography by Walter Isaacson at the pool this summer. It’s a great, solidly researched biography. And for PR professionals, it provides a pretty detailed peek at Apple’s bag of PR tricks. It’s also instructive to see just how important PR was for Steve Jobs and Apple.

There’s a famous picture of Steve Jobs holding a cheque for 250 000 $ in 1977, that I’ve used on this blog before - it’s the first VC money Steve Jobs and Steve Wozniak ever received, from angel investor Mark Markkula.

The money was earmarked for the production of the Apple II, Apple’s first mass market product. But before spending any money on hardware, Jobs used his cash to hire the best PR professional in Silicon Valley:

“The first step in this process was convincing the Valley’s premier publicist, Regis McKenna, to take on Apple as a client. (...) McKenna’s two specialties were doling out exclusive interviews with his clients to journalists he had cultivated and coming up with memorable ad campaigns that created brand awareness for products such as microchips.”

2. The power of exclusive interviews

From McKenna, Jobs learned the power of exclusivity, writes Isaacson, and he would use it to great effect for the rest of his career. This is from the description of the promotional tour of the Lisa computer (early ‘80s):

“Jobs went to New York to do publicity for it in his role as Apple’s chairman and poster boy. He had learned from his public relations consultant Regis McKenna how to dole out exclusive interviews in a dramatic manner. Reporters from anointed publications were ushered in sequentially for their hour with him in his Carlyle Hotel suite, where a Lisa computer was set on a table and surrounded by cut flowers.”

3. Surround the introduction of new products with “national excitement”

PR is also one of the reasons that Jobs was so enthusiastic about bringing Pepsi executive John Sculley aboard as CEO in the late ‘80s. Although Sculley would later oust Jobs from Apple, initially the two men got along great. Jobs especially liked the idea of bringing in the architect of the famous “Pepsi Challenge” (one of the biggest battles in the famed ‘cola wars’) on board at Apple.

“Jobs enthusiastically agreed (with the choice for Sculley, kv). The Pepsi Challenge campaign combined ads, events, and public relations to stir up buzz. The ability to turn the introduction of a new product into a moment of national excitement was, Jobs noted, what he and Regis McKenna wanted to do at Apple.”

It’s quite clear from Isaacson’s book that Jobs’ success at launching products, which he perfected during the last decade, is not a matter of luck. Jobs understood, very early on, the importance of a flawless execution of a market introduction campaign, and he would perfect Apple product launches step by step for the rest of his career.

“Over the years Steve Jobs would become the grand master of product launches. Jobs found ways to ignite blasts of (press) publicity that were so powerful the frenzy would feed on itself, like a chain reaction. (...) It was a phenomenon that he would be able to replicate whenever there was a big product launch, from the Macintosh in 1984 to the iPad in 2010. Like a conjurer, he could pull the trick off over and over again, even after journalists had seen it happen.”

4. A successful brand can leverage the fierce competition for scoops

While Regis McKenna was obviously a great influence on Apple PR practices, it should be noted that Jobs was a PR natural, says Isaacson:

“Some of the moves Jobs had learned from Regis McKenna, who was a pro at cultivating and stroking prideful reporters. But Jobs had his own intuitive sense of how to stoke the excitement, manipulate the competitive instincts of journalists, and trade exclusive access for lavish treatment.”

Leveraging the competition among journalists is a great tool, because giving someone a scoop is almost guaranteed to bring results. But it’s obviously not for everyone. It’s not like you can line up journalists just by promising them an exclusive or a scoop. You need to be important to pull this PR trick off. It’s important to remember just how pop cultural the Apple brand became in the last decade, and even in the decades preceding it. Indeed, as Larry Ellison of Oracle said: “Steve created the only lifestyle brand in the tech industry.”

The lesson here is how crucial it is to align your branding and PR efforts, because there’s a virtuous circle effect: PR increases your brand, and an attractive brand will in turn make journalists more susceptible to your stories. Once you have a strong brand, playing the exlusivity angle will almost always bring success, because you can implicitly trade access for coverage of even minor stories about your brand.

Actually, Apple arguably had two world class brands to wheel out at product launches: the Apple brand and the Steve Jobs brand. Jobs, with his visionary salesmanship, his famed temperamental outbursts, had transformed himself into an pop cultural icon in the last decade. Here’s a billionaire who actively promoted the use of LSD, a tech visionary who was once banned from his own company only to return to stage the greatest enterprise comeback of all times while being paid the yearly salary of 1 (one) dollar. Jobs was an almost Shakespearian character. Journalists were intrigued by him: who is this guy?

It also strengthens me in the belief that most top managers underestimate the need to work on their personal brand and their personal relationship with journalists. Our own CEO report in november 2011 showed that most top managers try to keep their media contacts as businesslike as possible - an arm’s length approach to media. CEO’s often distrust journalists and media. Steve Jobs’ example, I think, shows that this might not be the best strategy.

Before you argue that your CEO is not as interesting or colorful as Jobs, I would like to stress that exclusive access to a friendly, human, authentic face at the top of your organization, will always work well with journalists. They meet enough unfriendly, robotic, stifled top managers. They will be pleased to tell their readers how you are different.

6. On crisis communication: pushing back instead of eating humble pie

One of the most significant PR moments in recent Apple history is what’s now known as ‘Antennagate’. When the iPhone 4 launched, it was quickly discovered that there were problems with the antenna, resulting from the design of the phone. The problem caused calls to be dropped. Apple first tried to downplay the issue, which only fuelled the controversy. 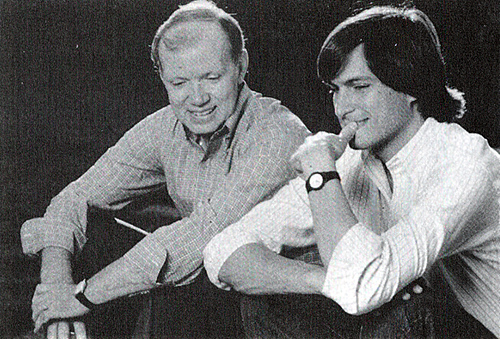 Jobs conferred with his trusted PR adviser Regis McKenna (photo, left), who advised him not to be humble (Jobs didn’t do humble very well), and not to apologize. Instead, the Apple strategy would be to explain that all mobile phones sometimes lost their connection. This would be backed by undisputable data. From there, the Apple story would be: all mobile phones do this, and the iPhone is, after all, just another mobile phone:

McKenna: “You should just say: ‘Phones aren’t perfect, and we’re not perfect. We’re human and doing the best we can, and here’s the data.’” (...) At the press event that Friday, held in Apple’s auditorium, Jobs followed McKenna’s advice. He did not grovel or apologize, yet he was able to defuse the problem by showing that Apple understood it and would try to make it right.”

The video of Jobs' performance is available on  YouTube: watch and learn. It's important to note, that Jobs wasn't merely spinning here. You'll see that the presentation is actually very fact driven - which helps tremendously when you're trying to convince an audience of very critical journalists.

This so called “high ground manoeuver” incited praise from Scott Adams, the creator of Dilbert: “Apple’s response to the iPhone 4 problem didn’t follow the public relations playbook, because Jobs decided to rewrite the playbook.”

This “high ground manoeuver” is a good reminder that classic PR strategies that are taken for granted are sometimes overly cautious. You can compare it with the truism that you should never go hostile on a television interviewer, or never to answer a question with a question.

On this blog, I discussed one instance where a counterquestion was used with stunning effect - effectively shutting down an impertinently curious interviewer. Here, we see that the tactic of instant apology is not always the only possible answer to a crisis. It’s good basic tactics, but for advanced players, it’s not necessarily the best advice. Sometimes it’s better to fight back. But it’s not for the faint of heart.