How to become the ruler of retweets on Twitter

Almost everybody agrees that being retweeted on Twitter is like the gold standard of interestingness and influence. But how should you write tweets to maximise your number of retweets? There’s many guides that tackle Twitter domination. This one is based on hardcore number crunching by some very smart geeks (namely @nnaveed, @kunegis, @tgottron and @arifah77 ) at the Institute for Web Science and Technologies (University of Koblenz).

They say they can reliably predict which messages will be retweeted more than others. Here’s what they found, in order of importance:

1. Use links in your tweets

Messages with a link are a lot more likely to be retweeted. Of all the parameters that the researchers looked at, links most reliably predicted the chance of retweets.

Links are the currency of the social graph, probably because they invite clicks (‘hey, what’s this?’) and engagement. If your link has new information, there’s a good chance that readers will offer their opinion about this information (‘Oh, I don’t agree at all!’).

By the way, you might want to insert the link right somewhere 25% of the way through your tweet, according to research by Dan Zarrella.

2. Don’t reply to other users, but DO mention their names

So if you write:

chances are small that you’ll be retweeted. On the other hand, a message like:

“Interesting post on retweets at www.finn.be but I think links are overrated @kris10vermoesen”

is more likely to be retweeted.

Say you’re a specialist in finance and you’ve just written an opinion on the new Federal Reserve policy. A lot of finance journalists might follow the hashtag #Bernanke or #Fed, even if they don’t follow you. Your message just reached a lot more people, simply by adding a #.

The opposite is even true: positive sentiment and positive emoticons in tweets actually prevent you from being retweeted. If I had to guess, I think it’s because people suspect ulterior motives behind positive tweets ('is he being paid to say this?').

increase the chance of being retweeted. But whereas negative messages are more likely to be retweeted, swearing actually hurts your retweet chances. Words like

are bad if you want to increase your chance of being retweeted. So, complaining about an airline or telco, especially if you include a negative emoticon, is good. Saying “fuck this shit American Airlines” is actually bad if you want your tweet to go viral.

Tweet about popular subjects that appeal to the masses, say the authors (no kidding). Here's the list of terms that get retweeted more than others. The ones with a negative value get retweeted less, as you guessed: 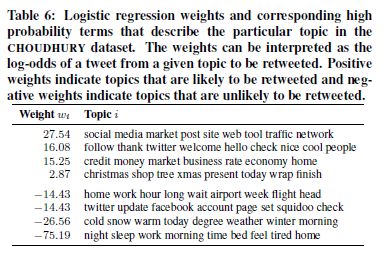 Tweets about social media, websites, twitter, money, but also about Christmas seem to be popular. The authors conclude that Twitter might even be called a “news medium”, rather than a personal communication platform. 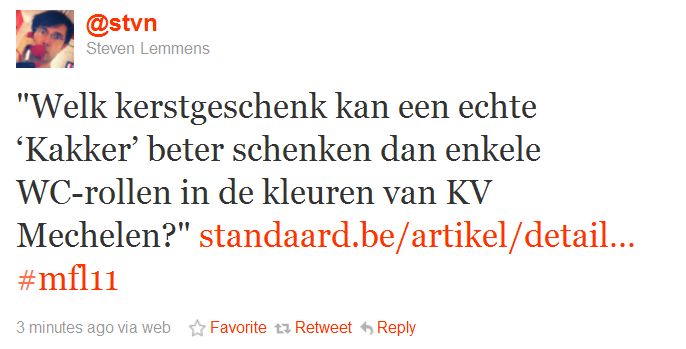 Which, according to the authors, means Twitter not really suited to post personal musings, your moods and the likes. These personal messages are far less likely to be retweeted. Based on the list that the authors give, the least interesting tweet in the world would be something like:

“Home after long day. Feel tired. Off to sleep. Have to get up early in the morning for work.”

Question marks in your tweet help to get retweeted. Probably because a question mark is a call to action – what do you think? I notice a lot of people adding rhetorical questions in their tweets, without really being interested in the answer. It’s unclear if those rhetorical questions are as likely to be retweeted as “real” questions. It’s certainly something that I would like to see researched further.

Exclamation marks on the other hand hurt your retweet factor. This surprises me, to be honest, because an exclamation mark is a sign of intensity, and the authors mentioned that intense tweets get retweeted more. The only explanation I can think of is that this might be because exclamation marks are often used after swear words like f*ck and shit.

The team behind the research developed a nifty web tool to test the interestingness of your tweets. Want to know how your tweets score on a scale from 0 to 100: test it here: http://livetweet.west.uni-koblenz.de

Do you agree with these findings? Disagree? Want to add something to the discussion? Send us a tweet at @kris10vermoesen (we'll retweet you if you're nice).