Announcements by industrial companies and associations are as regular as clockwork: Belgium has a shortage of around 3,000 engineers. This is also the case at Atlas Copco, whose global headquarters for 'Compressor Technique' located in Wilrijk employs around 700 engineers. Every year the company looks for about a hundred new engineers.

Atlas Copco asked FINN to organise a PR campaign in relation to Open Bedrijvendag (Companies Open Days) in the frame of its employer branding strategy. The objective was to invite as many people with interesting profiles to come and visit and familiarise themselves with the company through press coverage combined with a social media campaign. Atlas Copco had a team standing by so that at the end of their visit interested job seekers could apply immediately.

The idea was also to invite local residents and interested parties – it was after all the very first time that Atlas Copco in Wilrijk had opened its doors to the public.
In the period leading up to ‘Open Bedrijvendag’ FINN issued a press release and followed it up with personal pitches to journalists. This resulted for example in an article in the Gazet Van Antwerpen in which Stephan Kuhn (Business Area President, Atlas Copco Compressor Technique) talks in detail about compressors and the job vacancies at Atlas Copco (see photo). 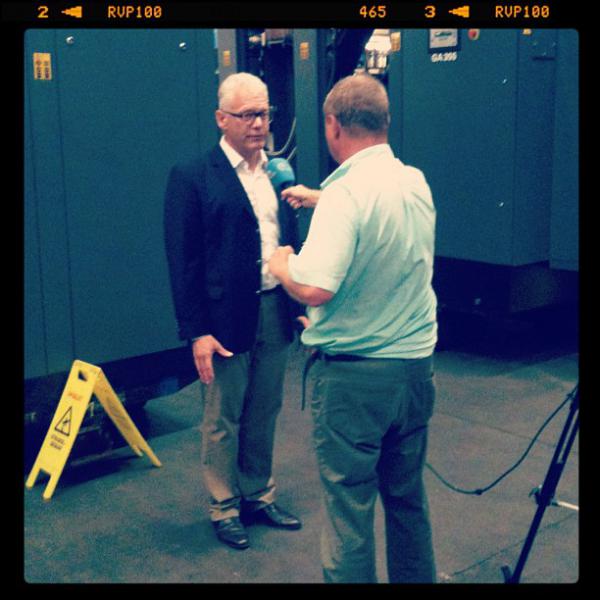 FINN was present at Atlas Copco on ‘Open Bedrijvendag’ to tweet updates about visitor numbers: this meant that after just one hour Atlas Copco was able to announce that it had already welcomed 3,000 visitors.

It seemed that the campaign had an immediate effect on recruiting: in the week following ‘Open Bedrijvendag’ the number of spontaneous applications to Atlas Copco quadrupled. In total around 8000 people visited the company’s Wilrijk location. This meant that Atlas Copco easily secured its place in the top five most visited companies, along with the steel construction materials manufacturer Joris Ide, dredging company Jan De Nul and the Antwerp training centre for emergency services Campus Vesta.

Atlas Copco on its collaboration with FINN

Kristian Vandenhoudt, Vice President Human Resources, Compressor Technique Service Division:“With FINN we established a PR plan to support our employer branding strategy. The campaign activities related to Open Bedrijvendag have demonstrated that the project was a real success. We are looking forward to continued impressive results for our employer branding with FINN using traditional PR channels as well as social media.”