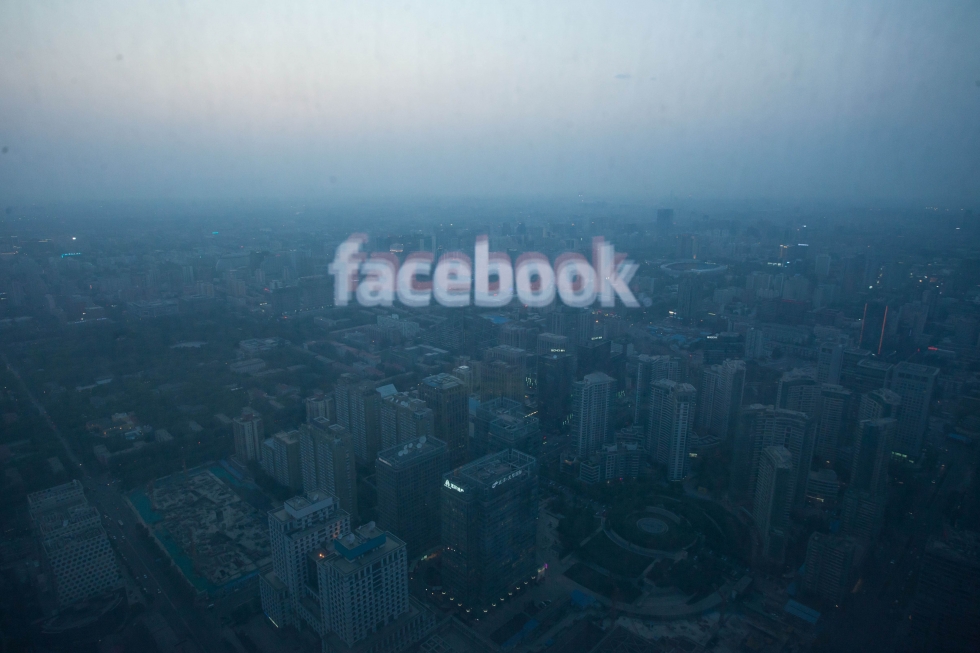 Just last month, researchers from the Graduate School of Stanford University and The Wharton School of the University of Pennsylvania published the result of their analysis of a huge body of Facebook page updates. They content-coded more than 100,000 unique messages from 800 different pages to find out what drives engagement ( “likes” and “comments”). The authors say it’s the biggest analysis of Facebook page posts to date, so there’s plenty of useful information in the research paper.

For reference, the average post in their sample received 10 000 impressions and got about 50 likes and 5 comments (but the variance was pretty wild: the most viewed post had 45 million impressions).

You can access the full research here, but we extracted some of the more surprising insights

An interesting difference between Facebook and Twitter is that emoticons work great to drive retweets on Twitter, as discussed in our earlier blog about “How to become the ruler of retweets”. On Facebook, an emoticon seriously cripples your chance at obtaining likes and comments.

You can check the difference in this image:

While emotional content (left) on average got more than 150 likes, content that used emoticons (next to it on the right) barely made it to 50 likes. This would suggest that it’s a good idea to craft different messages for Facebook and Twitter.

2. It’s not because you write “Moms” in your post that all the moms will engage with your brand.

An interesting factoid from the above picture is that “targeted posts” are not especially active. Targeted posts are posts that explicitly mention a target demographic like “Moms”.

It seems that moms don’t necessarily applaud this mention of themselves by liking or commenting on your post. 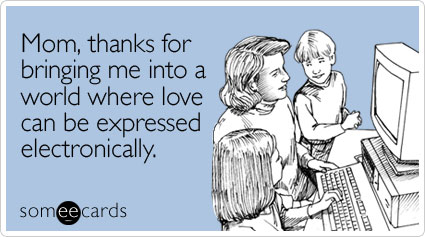 3. You should be posting way more video

Only about 0.5 % of Facebook posts by companies contain a video, according to the stats in the research. It might be time to increase that.

Photos are by far the most engaging content on Facebook, as everybody knows, and this is confirmed in the graph. But the graph also shows that video is a strong and consistent second for most types of pages. 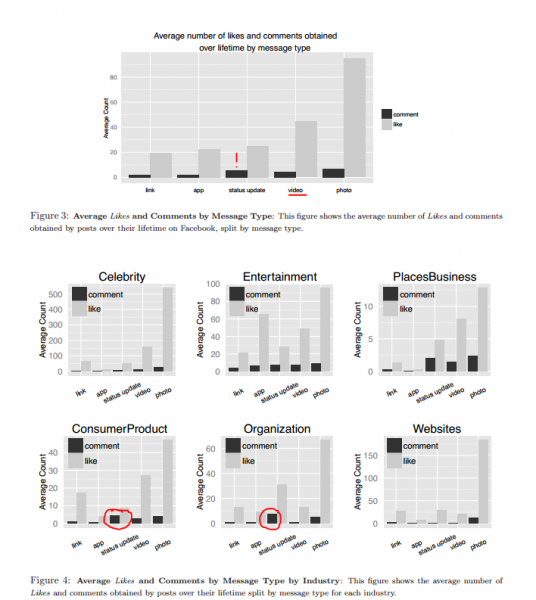 The graph also suggests that links are not a good way to drive on-page engagement. This is a striking difference between Facebook and Twitter. On Twitter, links are so important to get retweets that earlier research called links “the currency of the social web”.

On Facebook links aren’t that valuable for on-page engagement. Even the often vilified app updates (remember how you hated Farmville updates?) get more likes and about as many comments.

We should be careful interpreting this graph, though. One – crucial – type of engagement that wasn’t mentioned is the number of clicks on the links.

Why is that important? Because about 62 % of Facebook posts include a deal or freebie of some kind. Let’s assume that most of these include a link too. When posting a deal with a link, the marketing team would not be looking for comments and likes on this, but they would want to drive a lot of clicks. The fact that 62 % of messages include a deal of some kind lead us to believe that deals and freebies do work in the sense that they drive traffic (yes, we do operate on the assumption that marketeers don’t keep doing stuff that has proven not to work).

Another interesting finding is that the unadorned “status update” finishes in a respectable third place in terms of likes, and second in the number of comments, before video (we circled them in the above graph). For some types of Facebook pages like “Organizations” and “Consumer product”, status updates get even more comments than photos.

5. EdgeRank has a major impact on the number of likes and comments that your content will get

A difficulty when studying Facebook is that somehow, you have to remember that some posts and some types of posts will be shown to more users. To prevent people from drowning in new status updates, Facebook created an algorithm called ‘EdgeRank’, which shows users only those status updates that they will probably want to see.

Since you can’t get any engagement for your posts if they don’t make it through EdgeRank, EdgeRank will have a direct impact on engagement.

EdgeRank is a closely guarded secret, but we do know that Facebook uses a “3 T” model to decide whether to show a post to your followers:

The authors managed to simulate EdgeRank with some statistical tricks, however, and unsurprisingly they found that EdgeRank has an important effect on Facebook engagement. In some cases, EdgeRank can dramatically change the expected engagement for some types of posts:

6. Talking about prices, product availabililty and deals is not the way to go if you want likes and comments

It’s quite clear from the charts that Facebook users don’t like prices and deals, and EdgeRank seems to punish mentioning prices even further (check out those huge negative black bars in the graph below). The researchers call this “informative content”, and purely informative content seems to score quite poorly in terms of engagement:

That is, except if your name is Justin Bieber. In that case, mentioning prices and endorsing products is forgiven or maybe even appreciated:

“variables such as Price, Product Availability and Product Mention generally have a negative impact on engagement for most industry types but they have a positive impact for industry type “Celebrity.” Users seem to more forgiving of celebrity pages endorsing products and sharing price information.” (p. 29)

Here again, it’s a pity that the researchers didn’t track the number of clicks. Maybe Facebook users just LOVE deals so much that they instantly click on the links and buy the products – without leaving a comment.

7. Persuasive content is good for likes and comments – but don’t mention the holidays

Persuasive content is content that is not written to inform the reader, but to influence him or her or build a relationship. This can be done either by appealing to the emotions or the logic of the audience:

• the use of a celebrity to endorse a product or attempts to gain trust or good-will (e.g., via small talk, banter)

• messages with unusual or remarkable facts to capture reader’s attention.

If you want your posts to die at the doorstep, it suffices to mention a holiday like Easter or Christmas. This is because everybody is doing it. In the sample, researchers found that 40 % of all posts in their sample mentioned Easter (very original!). This leads, they say, to a “dulled respons” by the audience. Hardly surprising.

What is striking here is that – again – Facebook seems to be very different from what researchers found on Twitter, where the mention of “popular subjects” like Christmas were positively correlated to retweets. It might also be that social media has matured since the Twitter research (which dates back to 2011): it could be that people were happy to retweet Xmas and Easter messages a few years ago, but that they simply tired of brands trying to capture that goodwill.

8. Leaving a blank for your fans to fill in is the best way to get more comments

Well, what does help is knowing about the basic things that can drive comments and likes, as presented in this chart. For instance, it’s good to have a basic idea of what type of content drives the most “likes” and content.

Also, it’s useful to have a ranking for the different “tricks” that can drive on page engagement, like in this chart. Asking questions is a great way to get engagement, but leaving a blank to fill in seems to work wonders for comments. For likes, the best thing is apparently to ask for a like:

Does this mean that you can now “content engineer” your posts for more success?

It’s certainly helpful to know that some types of posts are underused, or underappreciated.

But the authors go further, claiming that you can use the model to “engineer” your content. For instance, it’s easy to see that instead of posting a link to a video, you should try to embed the video on your Facebook page. According to the model, this offers a much higher chance of getting comments and likes.

But to say that “content engineering” will have a huge impact seems a bit of a stretch, unfortunately. The predictive power of the model is limited, because (according to a statistician that we consulted) it explains only 22 percent of the variation in likes or comments.

That means that even if you do “everything right”, it’s no guarantee that you will get likes or comments.

And of course you can’t just randomly add content elements that might increase your engagement – your message still has to make sense.

In the end, it’s seems that the context and type of your content – in other words: the timing and creativity of your message, can have a huge impact on your engagement. Don’t replace your chief storyteller with an algorithm yet.

Many thanks to @robinwauters for giving early feedback on this post!