More eggshell, or: 4 things Angela Merkel can teach you about PR (and winning elections)

Last September, Angela Merkel won the German elections with more than 41 % of the vote - the best result of the CDU in 20 years, as well as her ticket to a historical third term as chancellor.

The creative mastermind behind her campaign was Lutz Meyer's agency Blumberry, and he was recently in Brussels to discuss how he had positioned the "Angela Merkel brand" for the elections, and to give some advice about political campaigning in general. Also, it happened to be the maiden event for STIMA's "Political Marketing" group, a great new initiative headed by Lode Soenen. 2014 being a rather important election year in Brussels, there were a lot of staffers in the room looking for good ideas to win their bosses' election.

Here are 4 things every political campaign needs, according Meyer:

“Left parties want to debate issues all the time,” said Meyer provocatively. “But I don’t believe in that style of campaigning. Don’t we live in a democracy because we want to delegate all these issues to the professional politicians?”

Debating issues can also be quite risky, he said.

“Look at the greens: they polled at 30 percent before the campaign. But when they started to campaign, they insisted on the fact that they wanted to raise taxes, here there and everywhere. We have to raise taxes on people with average income, the greens said, because we need to pay back our debt. After which they dropped to about 7 percent in the polls and they had to change their strategy. People said: no, this isn’t the green party that I had in mind. I like their talk about ecology and justice, but I don’t like taxes. So they had to change the campaign ten days before the elections. That’s a real problem.”

What elections are really about, Meyer said, is trust. Hence the importance of... eggshell.

“I don’t believe that political campaigns are educational seminars. People don’t want to get hammered with messages. They watch tv for four years, they already have formed a personal impression about all the issues. So what you do is: present the parties nice, and in a way that is not strange.”

For Merkel, the choice was made for a color pallette with a lot of eggshel (“when we presented it to the campaign, we called it écru because it sounds nicer than eggshell”, quipped Meyer).

The campaign created two sets of pictures: one with happy, smiling average Germans. 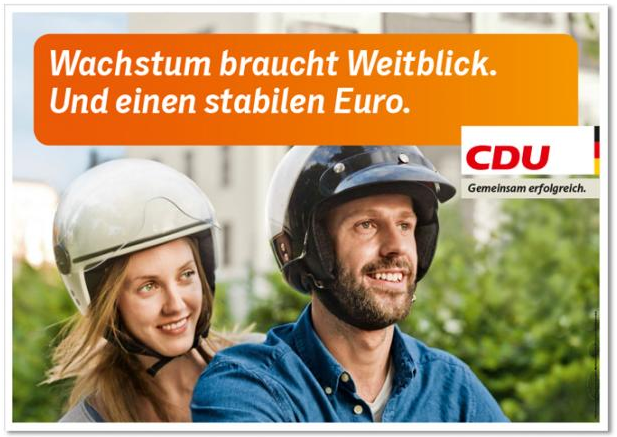 The other with the CDU party faces, with a similar feel to them – sitting relaxed, in soft light, in an IKEA-like interior. They are sitting in a sofa, reading a paper, being likable and warm. “This idea that an election poster needs to show only the eyes, mouth and the ears, is all wrong in my opinion”, said Meyer.

2. Something new (anything, really)

Every campaign needs ‘something new’, said Meyer. It doesn’t even matter much what it is, as long as it’s new. In Merkel’s case, the campaign built an app.

Whereas marketers in the past worked with QR codes, new technology allows any picture to serve as a QR code and become interactive. The Angela Merkel app allows voters to point their camera at a Merkel poster, and image recognition automatically starts a video of Merkel, speaking directly to the voter.

We tried it ourselves during the lecture – it’s a bit startling to have Merkel talk directly to you. It also works quite nicely – thanks to image recognition, “video Merkel” stays superimposed over the “poster Merkel”, even when you move your phone around.

Is this a gimmick? Absolutely. The app has received 57 votes in total. I wanted to find out how many times it was downloaded, and StackOverflow suggests that an app might be downloaded about 100 times the number of votes or reviews it received. This is confirmed by xyo.net, which puts the number of downloads on iOS (iPhone) at something like 7000. It’s safe to say that the app is a branding exercise rather than a way to swing the electorate.

But if the app cost € 20k to develop and generated a ton of generally positive or at least neutral articles in political and tech media (where the young voters are), then what's the problem? 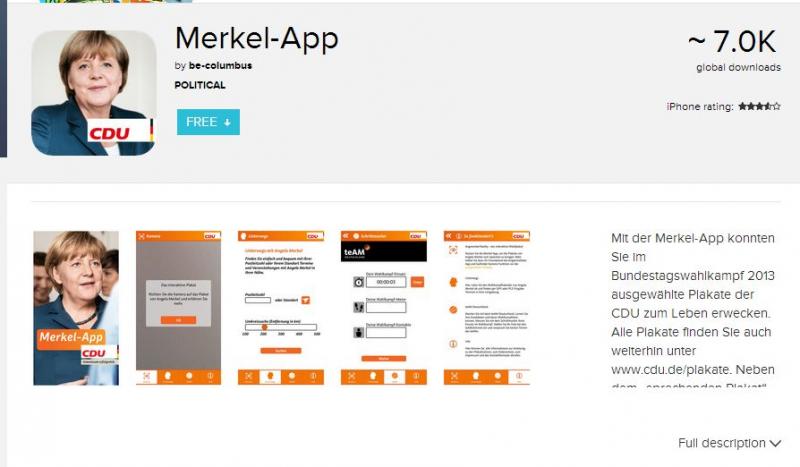 The lesson of the app goes beyond politics. Any campaign for any brand can use a touch of new to make it more interesting, to raise questions and conversation.

You can argue that this is a “trick”, and that's partly right.

In 2007, brands announced that they would start using social media – and they got coverage with it, and a lot of free buzz by marketing people. Just recently, I read about a fast food place that started to accept Bitcoin, which resulted in a lot of buzz. Is that a bad thing? Is that “all buzz and no substance”? Maybe. But maybe it also shows that, despite the serious business you’re involved in (politics, food, whatever), you haven’t lost your playfulness and curiosity. Or even, that you have a faint idea of what is going on in the world - in other words, that you are somehow relevant.

“Every campaign needs a symbol,” said Meyer. In Merkel’s case, the campaign focused on how Merkel brings her hands together in front of her. The question was: how to elevate her peculiar “Mr. Burns”-like posture to symbolic heights?

For this, the campaign turned to crowdsourcing. On the Facebook page (with almost 500 000 fans, by the way), the campaign asked people to send in a photo of someone holding their hands like Merkel. “It took a lot of double and triple checking to make sure that no unsavoury people like Hitler or Mussoline couldn’t make it through,” said Meyer.

When they had amassed a few thousand of these pictures, they assembled them into a gigantic mural on the CDU party headquarters in Berlin – a stunning visual that attracted attention around the world.

After that, the campaign managed to go viral: 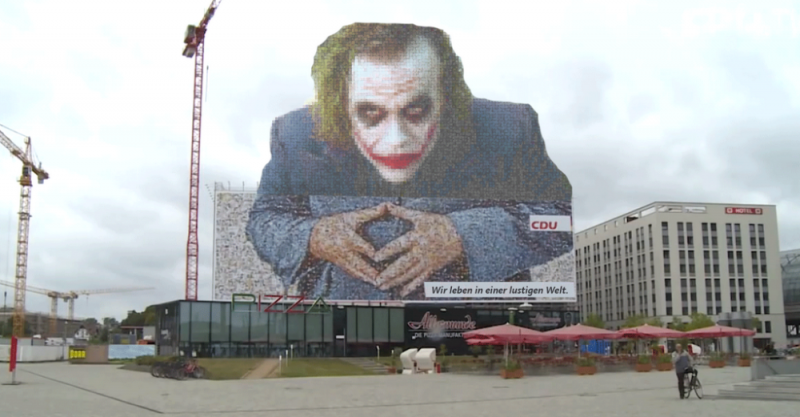 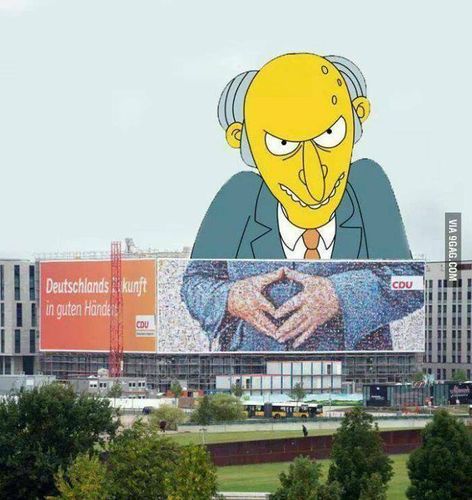 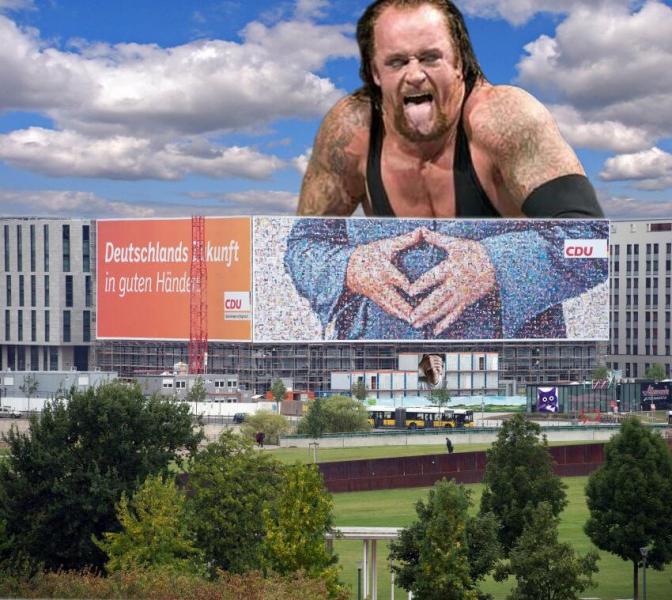 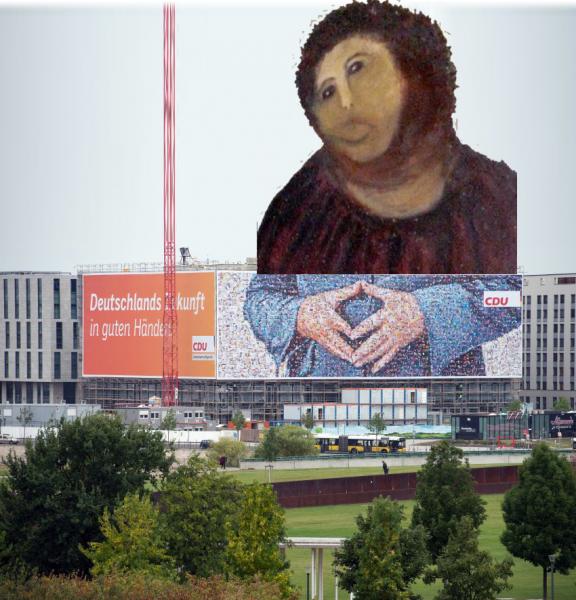 This is the beauty of scale, I think. There is something catchy about doing something on a ridiculous scale, requiring wasteful amounts of human energy and devotion.There is no rational explanation for it. I suspect that it has to do with the utter conviction that speaks from doing things so large that elicits our instinctive admiration or at least respect.

By the way, if you like the Merkel memes, there’s an entire Tumblr dedicated to it, where we got most of the pictures.

But what’s really, REALLY important, said Meyer, is to “win” the debate on television. The morning after any tv debate, he said, readers of newspapers in the whole country should read editorials that proclaim your candidate the winner of the debate.

“Winning the debate is essential in a campaign. If we had lost it, we would have been in a corner.”

So how do you influence the journalists to proclaim you the winner of the debate?

“You don’t. You let other people do it for you. These debates are taking place in a huge film studio. Outside the studio, there’s a huge press center where everybody watches tv. But your guests can also circulate there. So inevitably, you bump into a lot of people that have gathered there: famous sportspeople, musicians, artists, nobel prize winning scientists, business people. And what do journalists do: they ask – who won the debate? The game is simple: invite more people than the other side, and invite more interesting people. This is classical PR work.”

Are you working in political marketing? We would love to hear from you in the comments.