Research: lobbying is becoming a core competency for startups and VCs – so what about Europe?

Here’s one easy prediction for next year: there will be more headlines about tech companies getting into scrapes with law makers and regulators.

And with that, we can expect a further rise in public affairs activity by startups, to the point that lobbying is fast becoming a “core competency” for entrepreneurs and VCs, according to professor Elizabeth Pollman of the Loyola Law School. European startups probably underestimate the extent to which this is true, but let’s first take a look at the argument that Pollman makes about the US.

In an article that will be published in the forthcoming ‘Handbook of Law and Entrepreneurship in the United States’, Pollman argues that lobbying is the new normal in an industry that traditionally shied away from public affairs and policy makers:

“In the past, it was not unheard of for a startup company to lobby lawmakers or to engage experts on regulatory affairs, but it was not the norm. By contrast, startups growing up in the early twenty-first century include many notable examples that have faced significant regulatory issues and battles, and an entire industry of political and policy consultants and advisors has grown to lend expertise to startups.”

1) Startups are no longer confined to “cyberspace”

Earlier generations of startups were mostly active on the internet, less so in the “real” world.

Google didn’t replace an incumbent search engine (no, Altavista doesn’t count). It was more or less free to do what it wanted, and it took a while until policy caught up to its activities and started regulating the online world. Policy and regulation weren’t life and death matters for startups of the 1990s, or for their competitors.

But now that the internet and software in general “finally work” (Marc Andreessen’s words), entrepreneurs are using them to drastically reshape the real world. Think infrastructure (Hyperloop), self-driving cars (Tesla, Uber, Google), cryptocurrency (bitcoin) or mobile payments. The incumbents that they encounter are deeply entrenched and have decades of experience working with policy makers and regulators – and they’re not shy about using their well-funded lobbying groups to make life harder for the startups/upstarts.

Even without jealous competition, regulatory issues abound. Some startups present themselves as merely platforms, but enable their users to compete in regulated industries. We all realize that hotels are probably regulated (Airbnb), but the craftspeople on Etsy might not realize that the same goes for toys. Which leads to difficult questions like:

Pollman sees evidence that some startups realize full well that they operate in a gray zone or that they are outright breaking the law. But the entrepreneurs hope that by growing fast and by creating “realities on the ground”, they will be able to change or abolish the legal status quo. Pollman calls this “regulatory entrepreneurship”, which she defines as “pursuing a line of business in which changing the law is part of the business plan.”

As software continues to eat the world, we can expect more of these fault lines to show. Here’s how tech lobbyist Bradley Tusk sees it (*):

“The amount of legal battles is going to increase every year because every company is tech enabled in some way.”

2) Tech companies are less shy about using their influence

But tech companies have also become more vocal, says Pollman. She points to the fights against SOPA and PIPA and more recently online petitions around net neutrality as examples of a tech industry that realizes it has clout – and it’s not afraid to use it:

“Google amassed over four million signatures on a petition against the proposed legislation, and websites such as Reddit and Wikipedia shut down for a day of protest to raise awareness. More recently, and with dissension in the industry, tech giants similarly rallied to convince the Federal Communications Commission to pass net neutrality rules”

This evolution went hand in hand with increased spending on public affairs and lobbying:

Lobbying has become a core competency for entrepreneurs and VCs, concludes Pollman.

She even sees evidence of “revolving doors”. Power brokers are no longer moving to Wall Street after a stint in the power centers – they are now moving to Silicon Valley to join startups, serve on boards, or start consultancy firms to help startups and VCs navigate the halls of power.

Andreessen Horowitz, not to be outdone, took things a step further with the creation of a full blown in-house lobbying group: 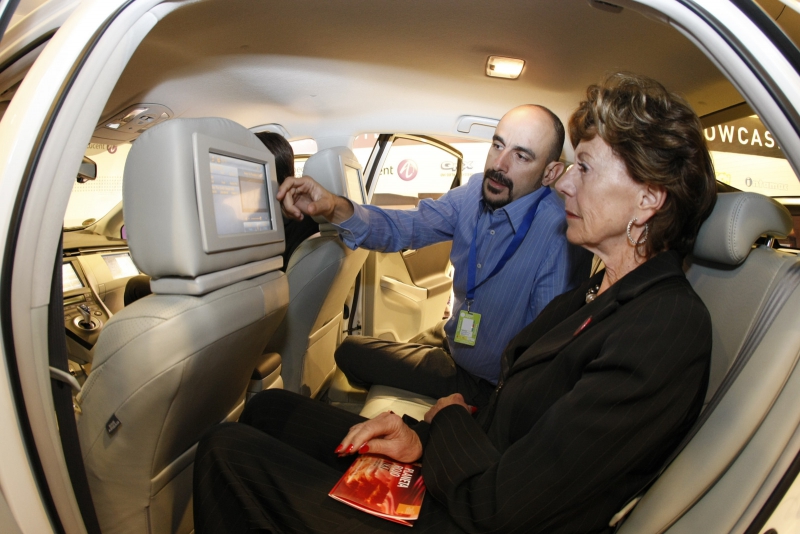 In the European operations of global US startups, we generally observe the same pattern as described by Pollman. Uber famously secured the services of Neelie Kroes as a senior advisor. But this is an exception – we have nowhere near the amount of political firepower sitting on boards of VCs or startups in Europe.

Airbnb was hailed as a successful example of how to build stakeholder relations in a European rollout, but there’s signs that the company has outstayed its welcome in some European capitals, with a backlash brewing in cities like Brussels, Paris, Berlin and Amsterdam.

In contrast, ‘native’ European startups seem generally uninterested in public affairs, for some of the following reasons:

1) EU entrepreneurs are overwhelmingly focusing on building their business

A lot of European founders are building SaaS (software-as-a-service) companies. Since they are building software companies, they’re not bumping into the “real world” yet.

Even if they could benefit from a public affairs strategy further down the road, our impression is that European entrepreneurs and founders are not very interested (yet). These are entrepreneurs trying to hit € 10, 20 or 50 million in revenue, and their primary concern is to get there fast. They have no patience to reflect on how policy might influence their business two to five years from now.

We expect this to change once these companies hit significant revenue and achieve market leadership throughout Europe, at which point policy (either on EU level or national) will have the potential to impact their operations and results.

2) EU entrepreneurs feel they are not able to influence policy

It also seems that European entrepreneurs feel thy will not be able to influence policy. Even when faced with onerous VAT regulation or the new data protection regulation (GDPR), they mostly sigh and comply. Or they opt out of compliance because they assume that they’re not on the radar of regulators.

This assumption about not being on the radar of regulators could very well be correct for most startups and scale-ups. The assumption that startups can’t influence policy, however, feels wrong. The interest among policy makers to find national startup champions and to help them thrive is at an all time high. This honeymoon will not last, however, and some startups will rue the fact that they didn’t make an effort to reach out to regulators and policy makers sooner. Already, we’re seeing signs that public opinion is getting a bit tired of the startup story.

If startups lobby, it’s often as a startup cohort.

By that we mean that startups don’t seem to organize according to the sector that they are active in (eg finance, HR & employment, SME, insurance,…). Rather, they seem to self-organize based on life stage or shared experience: being VC funded, growing fast, having between 10 and 100 employees.

The ‘European Startup Manifesto’, for instance, is a position paper in which EU startups ask for the removal of certain roadblocks that affect them as digital startups that are attempting to expand across Europe. Most of the demands in the manifesto are related to a more integrated market with more standardization and harmonization of business regulations across Europe.

Membership of these startup organizations and platforms seem mostly based on a decision by the founder to join. Usually because fellow entrepreneurs are members, and not because the membership is part of the company’s public affairs strategy (which is often non-existent).

(As an aside, it might be that the most intense startup lobbying is happening by parties who are not startups, but who cater to startups – I’m thinking of consortia of consultants and corporations who are vying for the funds that the EU earmarks for building ‘startup ecosystems’. These funds then trickle down into the system as incubators, accelerators, hubs and celebratory startup festivals.)

The European startup scene only truly matured in the last three to four years. It’s still too early for a lot of startups to start feeling the pain or the squeeze of regulation.

A notable exception might be BlaBlaCar, the French ridesharing startup which has taken care to position itself as the friendlier, less profit driven alternative to Uber, but which has now reached a scale where it is beginning to be noticed by regulators and incumbents.

Robin Wauters, founding editor of Tech.eu: “BlaBlaCar is quite transparent about their troubles, notably in Spain, and about their efforts to resolve them. Right now, for instance, they are working with the European Commission to find a solution for their regulatory issues in the Spanish market.”

Another interesting case is Unifly, a Belgian startup. It developed a platform that allows drone operators to comply to drone regulations across the world: it will recognize no-fly zones around airports, for example, and it communicates these restrictions to the drones that are equipped with its technology. Unifly was so early in the market that it is now consulted by legislators who want to regulate drones.

This rhymes closely with a story from Pollman’s paper, also about a drone startup:

These examples are more than just interesting stories, says Pollman.

Startups like Unifly and Airware prove that entrepreneurs and VCs are wrong to assume the so-called ‘lagging law narrative’, which has it that the law is forever lagging behind technology – and by extension, that innovators and entrepreneur have no choice but to bend or break the rules. This might seem arcane, but in a very practical sense it suggests that entrepreneurs and VCs have everything to gain from building early and positive relationships with policy makers and regulators.

An intriguing hypothesis by Robin Wauters was this one: “Maybe the lack of a Digital Single Market makes it harder for entrepreneurs to break the rules. From what I see, most European entrepreneurs start in their home market, and are careful to comply with regulations. When they expand to other countries, they expect the situation elsewhere to be different, and they take care to find out about the regulatory landscape in the new markets. And then they make sure that they are fully compliant when they enter the market.”

In other words, Europe might not have such a deeply ingrained culture of ‘permissionless innovation’, the Silicon Valley hacker ethos that urges entrepreneurs to go fast and break things. This might also explain the strong backlash against startups that originate in the US and bring that ethos with them in their European expansion. (That, and a healthy dose of protectionism.)

We’re curious to hear your input on this topic. If you know any good examples of European scale ups that are paving the way in public affairs, let us know in the comments or on Twitter!

(*) as quoted in Pollman’s paper

FINN wishes you a breath of fresh air for 2021