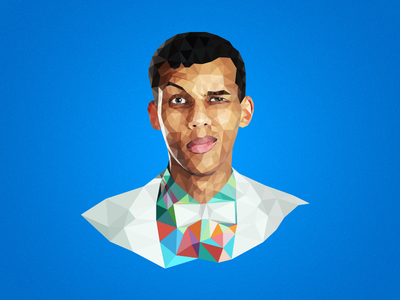 Why Stromae doesn’t stand a chance against a ten-year-old girl: scientific insights into celebrities and their reputations

If you are wondering what this blog post is about, here is a quick history lesson: in May this year, Stromae went to a restaurant in Brussels. The manager’s ten-year-old daughter was a big Stromae fan and waited patiently – until half past one in the morning – for the chance of a photo with her idol. Unfortunately Stromae wasn’t in the mood for photos.
In the version the girl’s father put online later, Stromae snarled at the poor child, “No photos”, later repeating “Didn’t you understand? I said no photos”.

The indignant father posted the pitiful story on his Facebook page – and even set it to rhyme, for anyone who wants to sing it to the tune of Tous les mêmes. Before long, it had unleashed a media storm.

The “incident” dates back to May, but L’Eté Indien on TV channel France 2 stirred it up all over again at the beginning of this week in an interview with Stromae. The star took something of an easy way out with the reply: “The girl’s father has the right to complain about my behaviour, and I have the right to refuse photos sometimes. I also have the right to be tired and take a holiday”.

Predictably enough, that caused yet another storm in the media teacup this week, with reports in almost all the Belgian newspapers. That raises certain questions, such as:

Why do the media keep stirring this little incident back up?

You might ascribe it to the fact that the media have an unhealthy obsession with negativity. Or maybe the media are just demonstrating a very human behaviour pattern: research has shown that people are naturally more attentive to bad behaviour and also remember it better. Researchers have christened it the “misanthropy effect”.
“Bad behaviour by celebrities attracts more attention, is stored better in our brains and is easier to recall.”

This explanation is also partly due to the fact that Stromae is such an unchallenged master of image management. Few other artists have his ability to cultivate an edgy, artistic image while still being a nice boy you could take home to your Mum.

So the general public don’t expect Stromae to have a bad day now and then – which makes us remember an unpleasant incident all the better:

“We remember behaviour that doesn’t meet our expectations better than behaviour we did expect.”

That insight might even be the explanation for the “misanthropy effect”, some scientists believe: maybe the reason why we remember bad behaviour is that we naturally assume people are good, and we are deeply disappointed, time and again, if those expectations are let down.

Is this incident bad for Stromae’s reputation?

Yes. A study published last year in the Journal of Business Research has shown that the moral reputation of celebrities is dented if they get bad publicity for events they are responsible for themselves. That is clearly the case here. Stromae admits it himself: he was tired, he said, and didn’t want to be in the photo.

If you asked the general public about Stromae right now, you would have specific evidence of the damage to his image in the form of less positive reactions to statements such as:
• “I am sceptical about Stromae’s virtues and values”,
• “I think Stromae shows a lack of integrity”,
• “Stromae can’t expect much respect from me”.

In this case, even worse, there are aggravating circumstances.
Damage to a reputation is exacerbated if the general public believe a star’s behaviour “sets a bad example”. We can deduce from reactions to the incident that the public believe a star like Stromae should make time for ten-year-old fans, even if it is late at night and the star is tired.

What specific consequences will this have for Stromae’s image?

We won’t just take a different view of Stromae’s behaviour, but of his character too. A theory in psychology called the “fundamental attribution error” says that human beings are inclined to ascribe people’s problems or mistakes too quickly to who they are – their character – than to their circumstances.
This means some of the public will not listen to Stromae’s excuse that he “was tired”, but instead people will be inclined to think: “Stromae acted arrogantly towards that girl because he is an arrogant person”.

This clashes at quite a fundamental level with the image that Stromae has so carefully constructed.

Will Stromae lose fans due to this incident?

That depends. Real diehard fans have a mechanism to protect them from bad news about their idol, research has shown:

“Consumers who are deeply attached to a brand will instinctively come up with counterarguments if the brand is attacked. This defence mechanism reduces the negative impact of bad news about the brand and lessens the risk of a more negative attitude towards it (attitude degradation).”

So real, passionate Stromae fans will nod in agreement if Stromae says he needs an evening off too now and then.
People who are less fanatically devoted will protect themselves in a different way against this bad news. They will be more likely to distance themselves from Stromae, probably muttering something along the lines of “I always thought it was a bit suspicious that he seemed to be such a nice guy”.
This is called CORFing (Cutting Off Reflected Failure), which means that we mentally disconnect ourselves from brands or people we do not think are doing the right thing.

Does this incident mean we are going to buy less Stromae/Mosaert socks, or other brands that Stromae endorses?

Mountains of research has been done into advertising that uses famous faces, because it is such big business – just think of the serious bite George Clooney takes out of Nespresso’s marketing budget. But as to the question of whether bad behaviour by a celebrity also has a negative impact on the bottom line is not easy to answer, or at least not yet. There is one study showing that the value of a company’s shares fell after a famous face of the brand was in the news for negative reasons.
However: in 2006, researchers set up an experiment to find out whether bad news about celebrities impacts sales of a product they endorse. In the experiment, Japanese and American consumers were told that stars like George Clooney, Tom Cruise, Leonardo DiCaprio and Denzel Washington had a well-concealed drug addiction.
Then they tested whether the consumers were still inclined to buy a tablet PC recommended by the stars in question. What happened? The tablets sold better if the consumers knew the stars were drug addicts: it seemed the test subjects felt something like sympathy for them.
Unfortunately that study is not really relevant in this context: drug use is mainly a private problem for the user. Violating a social code such as “thou shalt be nice to your fans, especially if they are only ten”, is far more “serious” from this perspective.
The research from 2013 mentioned above showed something similar. Researchers believed damage to celebrities’ reputations would impact the brands that used the famous face in their advertisements. However this turned out not be true. The researchers’ conclusion was: we do see a link between the celebrity’s moral reputation and the brands they advertise, but the relationship between the two is more complex than we initially thought.

Should Stromae have just said “sorry”?

Probably. Managers of famous people like Tiger Woods and other big stars who fall from grace usually apply two principles to crises of this kind:
1. They try to attribute the cause of the incident to factors external to the stars themselves. This was how Tiger Woods’ entourage dealt with the situation: “it wasn’t Tiger Woods who messed up, but the drink that did strange things to him”. This is the equivalent of “they made me do it”.

2. They try to minimise the “moral” damage by means of a hasty public apology, followed by a symbolic act showing that the star intends to mend his or her ways. Often this means a stay in rehab. In Stromae’s case it would be something like a free concert for young fans, followed by a – very long – photo shoot.

Do we really need to devote so much time and effort to this little bit of celebrity gossip?

No. But we will be pleased to devote our time and effort to your feedback on Twitter: @rafweverbergh, @finnbe

This blog was inspired by the Master’s dissertation by FINN consultant Elien De Jaeger on celebrity endorsements. Talented young graphic designer Yannick Van Houtven gave us permission to use his fantastic image. See more of his work on Dribbble, and follow him on Twitter. Thanks, Yannick!