What is newsjacking (definition)? Newsjacking is a PR tactic in which an organisation leverages existing news in order to get attention in the media or on social media. The word newsjacking refers to the English "hijacking".
The concept was popularised in David Meerman Scott's 2011 book Newsjacking - but its real breakthrough came when it was one of the "words of the year" in the 2017 edition of the Oxford Dictionary.

David Meerman Scott himself says he is surprised that the word has faded away and is now all the way back.

For those who work in communication, it may be less surprising. It did take companies about ten years to find the right mix between social, marketing, conversation management and PR - and before they felt secure to include some newsjacking in their mix.

In a successful newsjacking, an organization succeeds in injecting a marketing message into the reporting of a particular fact. To do this successfully, the organization needs to respond (usually quickly) to a news event that generates a lot of press attention in a short period of time.

What is the advantage of newsacking?

Newsjacking is not a must, of course, but successful newsjacking does help your brand move forward. According to Binet and Field (2013), "share of voice" is an important factor in the growth of brands. In short: if your brand succeeds in acquiring more share of voice, you will also acquire a larger market share in the long run.

Mass media and word of mouth (also called "buzz") are two excellent channels to increase your share of voice. In addition, successful newsjacking shows your stakeholders that your brand is concerned with the outside world: that is good for your reputation.

How does newsjacking work?

Newsjacking requires an excellent sense of timing. In order to be successful, the organisation has to make its reaction known (via social media or via a press release) while the news is spreading quickly and attracting a lot of attention - but  before most media have reported about it.

Newsjacking doesn't need to be complicated, as Lego showed when it successfully hijacked the Tesla Cybertruck launch.

In the viral story of the coffee cup in Game of Thrones, Starbucks managed to score some $2.3 billion in advertising value equivalent. The recipe for success?

The clash of the mega-brands Game of Thrones and Starbucks in the first place.

In addition, the fact that Starbucks managed to sound very nonchalant ("TBH" for "to be honest", an almost reddit-like opener), a touch of humour and a Starbucks product in his reaction. A team of copywriters was under tremendous pressure to get that perfect line on Twitter.

Social media is the best channel to do newsjacking, but a short e-mail to a journalist friend can work just as well, or why not: a full blown press release to your regular segment of journalists.

We thought it was a story that could get traction: digitisation is a big trend in the media and about 70 percent of Belgians are working.

Moreover, people tend to attach great importance to their pay slip (or at least to their salary). By quickly connecting with our client Doccle, we succeeded in formulating a response ("Electronic pay slips via Doccle are already technically possible for 75 percent of the employees today, without any extra investment") and in getting a share in most of the reporting on the proposal, such as in Het Nieuwsblad and VTM.

But you can also plan newsjacking in advance in some cases.

You can also plan some newsjackings in advance, because you know that some news facts are coming.

At the time, people were eagerly awaiting the new taxi plan in Brussels. Would the minister for Mobility pave the way for Uber, or would the taxi monopoly hold? And: if Ubers were allowed in, would they be allowed on the bus lane, like taxis?

That gave us the idea to generate some attention for our client Zipcar, a free floating car sharing service. Because if taxis are allowed on the bus lane, why not the fleet of shared cars?

Our tactics were simple: we sent out a press release in which Zipcar claimed the right to use the bus lane as well - with a Photoshop image showing a bus lane with "car sharing". Le Soir, among others, picked up the story.

Okay, we didn't get 2 billion in media value out of it, but it was a low cost way to create awareness for a new concept, and to bring the message of car sharing to the attention of the public. Success factor here: almost certainly the image that spoke for itself.

In any case, newsjacking requires an excellent sense of timing.

The reason: if everyone has already picked up the message, you're too late - it's like trying to catch up with a wave on your surfboard (doesn't work). You have to be on the wave. In Belgium we use the following rule of thumb. We aim for newsjacking when news coverage has already been picked up on one or two online media - but it hasn't appeared on television broadcasts or in print yet. 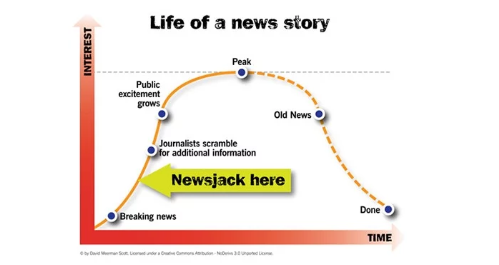 The fact that two online media picked up the news shows that there is interest and that media do not regard it as "that is a story of HLN".

Sometimes it happens that an online medium tries to break a story and push it into the mainstream, but other news organizations ignore it because they don't feel like copying their competitor (or giving that colleague credit). And sometimes they don't care about copy-pasting (weird, but that's how it is).

The fact that a story hasn't been published in print yet, offers the possibility for television journals and print editions to pick up the story for the evening news or the next day's newspaper.

You can't newshape if you have no idea what your organization's point of view is about certain topics that live in society.

For issues, companies usually have a catalogue of messages - but for trends that offer opportunities much less often.

However, it is very useful to discuss recent trends and developments with the CEO (or other C-levels) on a regular basis, and to develop business positions around them, as well as documenting them and communicating them (also known as: "thought leadership").

These points of view often come in handy during newsacking. It's much easier for your CEO to give a "go" if you start working with messages that have been used before, than with messages that you need to develop quickly for the occasion.

So build up a corporate communication catalogue at quiet moments that not only consists of your answers to issues, but also leaves room for trends in your sector. You can use it when there is a lot of time pressure, such as during a (attempted) newsjacking.

Newsjacking is an exercise in balance (and tone of voice).

It's easy to get carried away by fast breaking news. And to convince your colleagues, sometimes a dose of enthusiasm is needed. So don't send out news jackets without someone judging your messages (and visuals) with the gaze of a neutral outsider. You want to avoid being ridiculed ("the ridicule factor"), but also being accused of using tragic events for marketing purposes.

This happened to 3 Suisses when it reacted to the terrorist attack on Charlie Hebdo: it made a visual pun on "Je Suis Charlie"/"Je 3Suisses Charlie". The reactions were very intense, as you might expect.

When to avoid newsjacking?

Newsjacking is a delicate art - sometimes it's better to let a train pass than to try to jump on it.

Because the turnaround time for newsjacking is so short (about 1 to 3 hours maximum), you put pressure on your own organisation: you want to have something approved outside the usual processes and turnaround times.

In addition, you may have to obtain permission from the C-level or management level if you want to take certain positions in the communication. It is not uncommon for organizations to start pushing back or doubting. Moreover, you can put yourself in a difficult position if your reaction does not have the desired effect (or unwanted effects).

Evaluate at any time whether or not it is still worth the effort.

Don't be afraid to stop an action if you notice that you missed the wave, or if you notice that the topic is less alive than you thought, or if the timing doesn't allow you to come up with a reaction in time. There are other waves to catch.

Also read: the interview with FINN managing partner Kristien Vermoesen on RTBF about newsjacking as a result of the Game of Thrones coffee cup (in French).

Do you have any tips and best practices for newsjacking? Let's hear it in the comments or on Twitter (@finnbe)!

Influencer marketing: how to

Ranking 2021: which Belgian companies offer the most transparency on their carbon footprint?