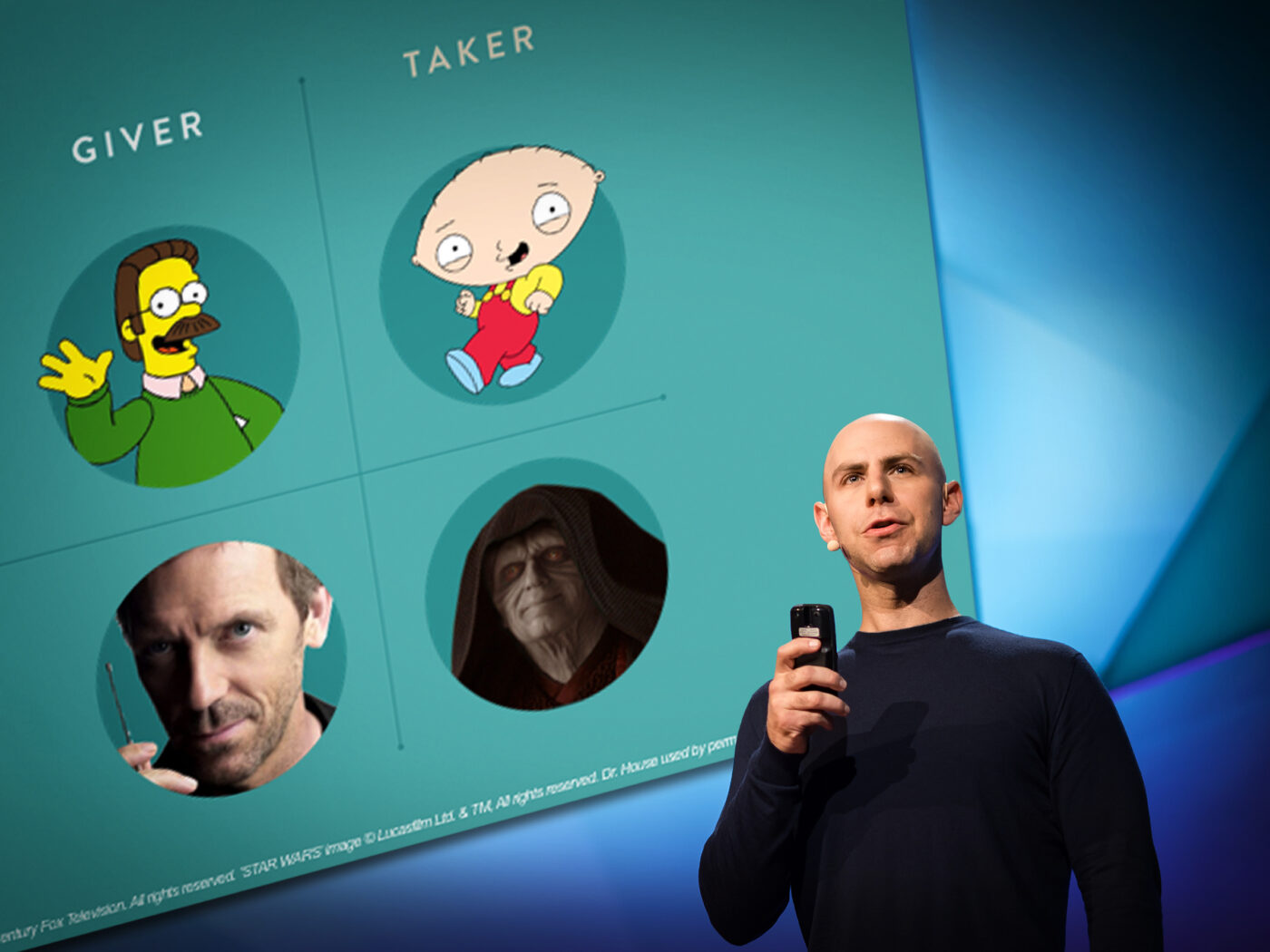 Improve your reputation by being a giver, not a taker

We have always felt strongly that giving should be an important part of reputation – ever since we read “Guerrilla Marketing” by Conrad J. Levinson, who says, emphatically, that :

The great marketeer is always looking for reasons to give

But it can be hard to convince people of that. Some marketing managers and executives understand that generosity is a part of PR. Others understand it intellectually, but they note that they are busy, under pressure to make quarterly results – and ask us very pointedly: that’s fine, but what’s in it for us?

When we try to explain how reputation flows through a network, and how a great reputation will eventually yield great returns for a company, we often get distracted nods – yeah, yeah.

But some time ago, a book was published with rock solid, scientific evidence that our intuition about the value of giving without asking (or taking) is correct – in fact, that we’ve underestimated the value of giving. In Give and Take: Why Helping Others Drives Our Success, Wharton Business School professor Adam Grant instead argues that the those who want to be hugely successful need to focus not so much on what they’re getting, but on what they are giving.

Are you a giver, a taker, or a matcher?

Grant divides people into three groups: givers, takers, and matchers. Givers, are “other-focused, paying more attention to what other people need from them”, rather than focused on what they can get out of a relationship.

As you’d expect, takers, on the other hand, “tend to be self-focused, evaluating what other people can offer them.”

This is Wolf of Wall Street (photo), Gordon Gecko territory: people who strive to “capture value”, less to create value for others.

Givers might be Grant’s favourite of the types, and the group he advocates readers join, but he acknowledges this is one team that’s currently a little short of members.

In the workplace, givers are a relatively rare breed

Contrary to what you might think, the purely self-interested actually don’t dominate the workplace either.

Instead, most of us “become matchers, striving to preserve an equal balance of giving and getting. Matchers operate on the principle of fairness: when they help others, they protect themselves by seeking reciprocity.”

Which sounds logical enough — you can’t grow your network if you’re utterly selfish, but you don’t want to waste time or resources on others who can’t really help you advance either. The result: you help those who can help you.

Now that you know about these three types, here’s a pop quiz: which tends to be least successful? If you said givers, pat yourself on the back. Grant cites statistics showing that, on average, givers earn 14% less than takers and are judged to be 22% less powerful.

So why on earth would Grant write a whole book advocating that more of us adopt the givers’ strategy of generosity?

Because givers also tend to be the most successful among us.

When I took another look at the data, I discovered a surprising pattern: It’s the givers again.

The power of networks

How is that givers dominate the ranks of the most successful? It turns out that it’s all about their networks.

People really like generous, selfless people, and having a lot of people really like you and want to help you is a huge career advantage. One study, conducted among Belgian medical students, showed that givers lagged the first year of their studies as they used spare energy and hours helping others.

But after that, things turned around.

As students progress through medical school, they move from independent classes into clinical rotations, internships, and patient care. The further they advance, the more their success depends on teamwork and service.

Givers are successful because matchers want them to be successful — and remember, most people are matchers. Givers tend to receive a lot of favors from matchers, often without even realizing it, says Grant:

Karmic moments can often be traced to the fact that matchers are on a mission to make them happen. (…) they’ll go out of their way to reward givers who act generously toward others.

This is what we, as PR people, are always saying to CEOs, founders and marketing managers: PR is about every interaction with every stakeholder. Your colleagues, suppliers, competitors, customers, employees, interns, family and friends observe your behavior, and they will reward you or punish you accordingly.

It’s easier to win if everybody wants you to win. If you don’t make enemies out there, it’s easier to succeed.

Why? Research shows that the people are less willing to help those they perceive as acting selfishly. In fact, people are willing to punish themselves — just to punish a taker.

One study asked participants to choose between evenly splitting $12 dollars with a taker who has previously made an unfair proposal, or splitting $10 with someone who had offered a fair deal. More than 80 percent sacrificed a dollar to punish the taker.

Being a taker may pay off in the short run. But it comes back to bite you over the long haul. Not only are people reluctant to do business with confirmed takers, they’re also more than happy to tell others about a taker’s selfish behavior.

Research shows that when people get burned by takers, they punish them by sharing reputational information

(PR peeps, are you taking notes?)

But it might not even take someone else badmouthing you to hurt your image if you’re a taker. You could be doing it all by yourself on social media. When Grant looked at sites like Facebook and Twitter, he found:

Takers posted information that was rated as more self-promoting, self-absorbed, and self-important. They featured quotes that were evaluated as boastful and arrogant

In short, takers had more connections, but they used their networks for bragging and asking for favors rather than cultivating real connection by helping others.

Which is the fundamental lesson here. Takers might have as many connections as givers (if not more) but they use them differently, milking them for whatever they can provide. Givers, on the other hand, view networks synergistically, creating value for others in a way that creates a positive feedback loop of mutual aid and admiration.

How to be a successful giver

Hopefully, you’re convinced that being a giver, not a taker, is the surest route to greatness. But you also no doubt remember a key fact from earlier in the post — givers can soar professionally, but they are also overrepresented at the bottom of the career ladder.

So how can you ensure the energy you invest in others comes back to you magnified, instead of simply being a drag on your productivity and mood? Grant offers four suggestions to become a successful giver and not a doormat. 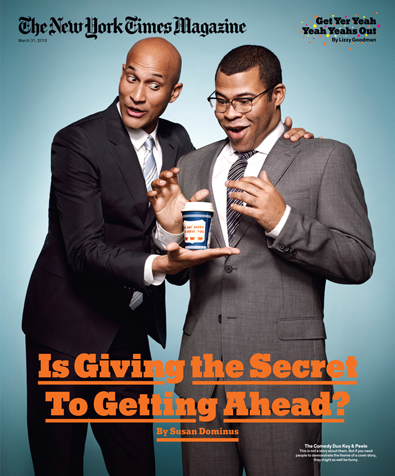 The first essential step is to be bold and take the leap into generosity without expectations of immediate rewards.

We are terrible at guessing who will be able to help us in the future, so if you refuse to cultivate a connection now because you can’t envision getting any immediate benefit from the person in return, you’re cutting yourself off from what could be an essential idea or introduction later on.

Remember, Steve Jobs insisted it was studying calligraphy in college that gave him the necessary tools to build a world-conquering computer company. No one could have foreseen that. We can never predict where inspiration will come from.

Grant suggests you start with a small but powerful commitment to the giver’s mentality he calls the five-minute rule:

You should be willing to do something that will take you five minutes or less for anybody.

He also offers another quick idea to start giving more — simple introductions. Connect acquaintances that might be able to help each other whenever you can.

You’re probably already acquainted with the people your close friends know. So-called “weak ties” are different. These more distant connections are ”more likely to open up access to a different network, facilitating the discovery of original leads,” Grant writes.

The trouble? Asking someone you barely know for help out of the blue is incredibly awkward. So ensure your request isn’t out of the blue by staying in touch with distant connections regularly — before you need their help.

It’s possible to get the best of both worlds: the trust of strong ties coupled with the novel information of weak ties. The key is reconnecting, and it’s a major reason why givers succeed in the long run.

Is it possible that, as a giver, you’ll expend effort on someone and not see that effort paid back? Of course. Your generosity might even be actively taken advantage of now and again. But the cost of these occasional disappointments is dwarfed by the benefits of giving people the benefit of the doubt. It’s a stance called “pronoia”.

“According to the distinguished psychologist Brian Little, pronoia is ‘the delusional belief that other people are plotting your well-being, or saying nice things about you behind your back,’” explains Grant.

Operating with “pronoia” not only generates good karma in your network, but also helps you create your own luck. Grant explains:

Luck is in fact a predictable, patterned response that most people have to givers

In other words, if good fortune falls out of the sky and into your lap, it’s often because of some good deed you did in the past. Do more good deeds despite your fear of getting burnt and you’ll create more luck.

4. It’s okay to be ambitious and strive for recognition and success

Giving should not all be about helping others – it’s perfectly fine to be a giver and work towards your own goals at the same time. In fact, it’s what separates more successful givers from less successful ones, says Grant.

In short, if you want to get the most out of being a giver, you should have audacious goals for yourself as well.

One final note on how to be a successful giver — just because you should default to giving, doesn’t mean you should be entirely gullible. Helping the truly selfish will get you nowhere, so do your best to screen them out and avoid wasting your time.

The trick to doing this, according to research by Columbia University professor Adam Galinsky is to focus less on others’ emotions — a stance which tends to lead to deals that benefit others far more than ourselves — and more on their perspectives.

Ask yourself: if I were this person, what would I want? How would I try to get it?

When we engage in perspective taking, considering our counterparts’ thoughts and interests, we’re more likely to find ways to make deals that satisfy our counterparts without sacrificing our own interests.

And another final note for business leaders. Many companies do much to reward selfish strivers and little to reward generous givers. If you’re sold on the synergistic power of givers, that needs to change.

Some innovative organizations such as Google and Zappos are blazing the way, Grant reports, developing “peer recognition programs to reward people for giving in ways that leaders and managers rarely see.” If you want your organization to reap the benefits of a supercharged network of givers, you might want to consider following suit.

Take this quiz to find out if you’re a giver

Convinced of the power of paying it forward, defaulting to generosity and network building rather than always focusing on your own benefit? Grant has a free tool to help you figure out if your behavior matches your intentions. Just visit www.giveandtake.com for a free quiz that tests your giver quotient. You can also invite colleagues to rate your level of reciprocity, providing you with a spherical view of whether you’re currently acting like a giver, a taker or a matcher.